Is this anything like what people are looking for?

regarding the menubar & toolbar bmp, I don't have my version of it anymore so I can't post it, and you don't need it anyway. it was just the normal one with the colours inverted
Top

I tried that, but it didn't cut it. One issue was gamma (or the logarithmic response of the eye if you prefer): in the normal colour scheme the toolbar's background colour (RGB 240,240,240) is very obviously different from the editing pane's background colour (RGB 255,255,255) which is what you want. But if you invert them RGB 15,15,15 and RGB 0,0,0 look identical to me: both totally black. To make the toolbar (and other related GUI elements) noticeably lighter than the editing pane I found I needed to set them to RGB 64,64,64 or thereabouts (which is what I used for that screenshot) and that necessitated a new toolbar BMP.

The other, less technical, issue was simply that the colours of the toolbar buttons were not chosen randomly, for example the 'Run' button is green (for 'go') and the 'Debug' button is red (for 'caution' or something). Simply inverting the colours gives a magenta Run button and a cyan Debug button which just don't look right to me! That sort of thing is OK for a hack, but I wouldn't be happy with it in a properly engineered solution.

I'm also finding that there's quite a lot of work involved in making 'dlglib.bbc' (which is used for all SDLIDE's dialogue boxes) behave nicely in the Dark Mode. Even passing the flag to the library routines needed considerable thought (it's not generally acceptable, nor good practice, for libraries to access global variables). It's working now, I think, but it shows how a relatively minor change can escalate in complexity.

I'm not going to bother to make the List Variables, Profiler and Compiler utilities adhere to the Dark Mode setting because they run as separate processes and it really would be a pain to have to find a way to pass the flag to them. I hope that doesn't upset anybody too much, but there are limits to the amount of effort I'm prepared to put in for a feature I will probably never use myself.
Top

I changed my mind. It's supposed to be an Integrated Development Environment and having those utilities not adopt the Dark Mode didn't look at all 'integrated'! So now they do indeed automatically follow the SDLIDE setting.

As an aside, because of the effects of gamma anti-aliased fonts look 'thin' in Dark Mode and legibility suffers somewhat. You may want to select a bold face, or a larger size, to compensate for this to a degree.
Top

guest wrote: ↑
Sun 09 Dec 2018, 10:30
I changed my mind. It's supposed to be an Integrated Development Environment and having those utilities not adopt the Dark Mode didn't look at all 'integrated'! So now they do indeed automatically follow the SDLIDE setting.

Thanks for all the hard work.
How have you implemented switching between normal and dark themes? Is it an option in a menu, or do you choose when SDLIDE starts up, or something else? Anything is acceptable to me - I'm just curious about what kind of approach you've taken.
Top

I put it in the Options menu. It seemed the obvious thing to do (it's where the Set Colours selection is after all) but no thought was given to it: 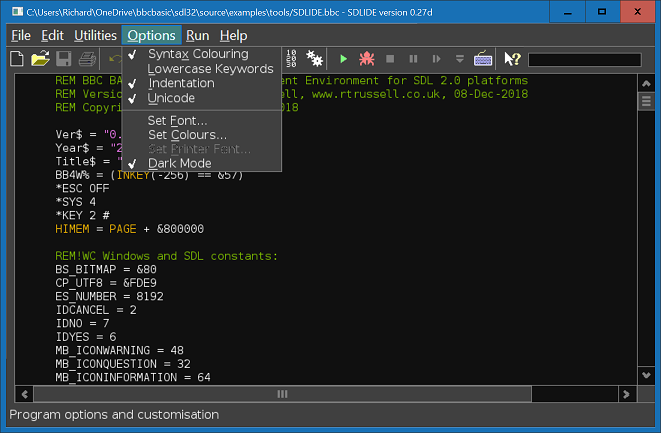 That seems sensible. Looking forward to trying it out.
Top

I suppose I should ask the question: is anybody else using a 'personalised' version of SDLIDE (or any of the other supplied utilities) which prevents them updating to the latest release? If so I'd be interested in incorporating their mods in the standard version, both to make them more widely available (if they are generally useful) and to restore the ability to upgrade.
Top
17 posts

Return to “Desktop platforms and IDEs”